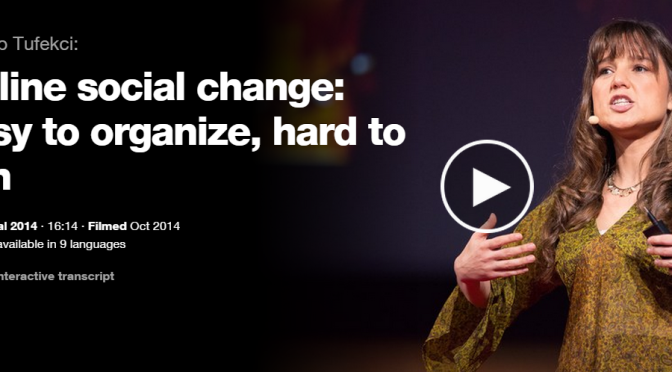 Social change is a difficult mountain to climb, but more and more we are relying on technological means to organise protests, build grassroots campaigns and spread awareness around the world. Twitter and Facebook for example, are online mediums that can efficiently and quietly mobilise people to action almost instantaneously.

We have seen Twitter used to monstrous effect with the despicable pop up videos and posts from ISIS, yet on the flipside, we also see a miraculous coming together of people around the world to build a social movement to combat the evil of modern slavery; in the past few years the Walk Free Foundation has built an unprecedented movement of over eight million people around the world (and still counting), an amazing feat that has been endorsed by Hillary Clinton, Bill Gates, Tony Blair and Richard Branson (among others).

A new TED Talk by techno-sociologist Zeynep Tufekci talks about the real strengths of online social development; from censorship and the effect on mass media to the supporting of self-determinism for peoples and cultures around the world. Take a look:

This presentation is a really interesting look at how technical innovation can be used to effect transformative social justice, but it also has some relevance to corporate social responsibility in our contemporary society. There is the argument that social innovation can lead to and encourage business innovation, and that these results of this can then become inputs into further social value and utility creation. Towards the end of the talk, Tufekci talks about the development of a social media platform by a young group in New Zealand called Loomio, to be used as a way of engaging the masses in decision making, to push social change. This is one of the many ways that social innovation is presenting a business case that can be replicated at scale across a variety of corporate and social projects.

SustainingPeople will be researching this phenomenon over the next few weeks, but in the meantime, our question to readers is this:

Do you think that social technology innovation can be used to further the cause of corporate social responsibility in our contemporary world? How can it be done?

We look forward to your thoughts!