In 2012, a small group in Borneo and now in the US have found a way to use recycled mobile phones to stop illegal deforestation around the world.

Deforestation accounts for more greenhouse gas emissions than all of our planes, trains and automobiles (as well as ships – don’t forget the ships) combined, and around 90% of this deforestation is caused by illegal logging. A recent TED talk from environmental technologist and CEO of Rainforest Connection Topher White shows us how recycling our old phones is helping to stop this at a micro level.

According to White, rainforests often have surprisingly strong phone reception, even out in the middle of nowhere. Essentially White put together a head of old phones and tuned them to hear certain types of noises (like the whine of a chainsaw). The device then alerts those on the ground via email, enabling them to keep track of an entire forest, and arrive in time to interrupt and stop illegal loggers.

White’s amazing creation and the story behind it is fascinating; what is more fascinating is how White describes the reactions to his recycled tech, and the  real effect it is now having around the world.

Rainforest Connection built a strong following on Kickstarter, surpassing their target fund by over 60% mid last year. They are going from strength to strength, and they are now installing their technology in the rainforests, of Indonesia, the Amazon and Africa. 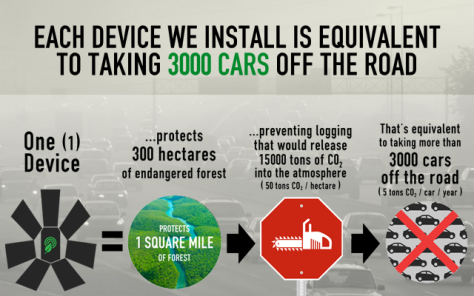 This story teaches us that the solutions to our problems (and to sustainability issues) are all around us; it just takes a creative mind and real life experiences out in the world to shape and change our world.